- October 14, 2012
Got a chance once again to Umpire at the Worlds Oldest Limited overs cricket tournament - which was first held in 1961 at Palace Oval in Tripunithura, a suburb of Ernakulam district in Kerala.  Here are some pics from this year's event. 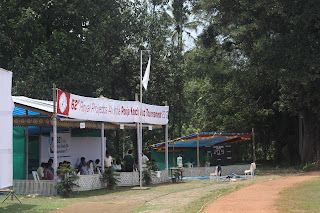 This first one is a view of the Pavilion which the Organizers (The Tripunithura Cricket Club or TCC as they are fondly known) had set up this year. The pavilion itself offers a very close view of the proceedings unfolding on the oval itself.

Here's another one - this time from the proceedings itself: 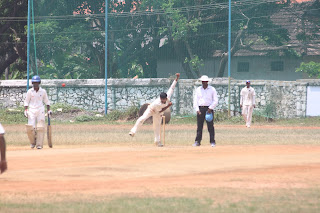 The oval is the proud owner of one of the oldest turf wickets in Kerala and Umpiring here has always been special event for me - here's some reasons why:

1. This was the venue where I had my first Official match as a Qualified Umpire - way back in 1996 - that was the inaugural match of that year's Pooja Cricket tournament
2. Special conditions / interpretations to Cricket laws which are applicable only to this venue - about which i shall explain in another post (soon?)

Here's another pic for now: 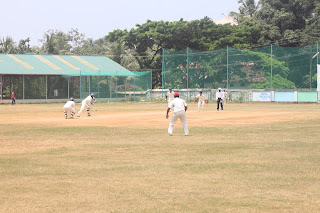 The picture above gives a wider view of the Oval, with the TCC's own all weather practice wickets in the background.  I'm mentioning it here as I"m hoping to encourage my company colleagues who complain of weather as an excuse against practice :-), a situation which has prevented us to field a cricket team which was one of the dreams I carried over to Kochi from Hyderabad after being part of Genpact's 'Dream Team' (2006-07). Hope my colleagues are listening ...

BK said…
I have read your blog it's very interested.