3 Reasons why SHRM16 is a Social Selling Opportunity

- February 10, 2016
I had chanced upon this interesting article on social Selling a few days back and as is possible in a browse-only mode while working from home, this led me to some more material and links (videos too) on that Social Selling before I got myself back to the topic I've been thinking about this month - The SHRM Annual Conference of 2016 or the #Shrm16.  It then struck me that Exhibitors are looking a Social Selling possibilities at SHRM16.

So here's why I feel HR Product / Service vendors can stand to benefit thru Social Selling if they are 'present' at the Exposition.

My first look at this gigantic conference which gets over 15k HCM / HR folks (Practicing, Consulting, Teaching, Vending to name just a few) under one roof which goes across the United States year to year  was in Atlanta, GA back in 2012. I've been to Atlanta, Orlando and Vegas with SHRM Annual so far - the last one being self-sponsored.
I had a 'deer-in-headlights' feel written all over my face during the first one and missed most of the action, including the bustling exposition hall - see pic below: 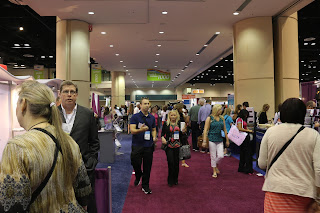 I learned my lessons from then on and could plan my day better with the information available on the SHRM App - yes, it has a list of exhibitors, grouped under various HR function / Roles.

1. Almost every attendee is already an influencing agent with Huge (at times dormant) potential to influence!
Let's go by Pareto and consider that it's only a portion who are within the 20% (like the 80-20 rule) of the total population HR folks in US are the ones attending these kind of conferences. Apparently, some bosses (I'm glad mine was different when I was in need) all over the world seems to wander outside the 20% - as the plethora of articles outlining strategies to win approvals from them seems to suggest.  Point I want to make is that as Exhibitors, your stall is going to be thronged by folks who can take decisions or influence decisions that are taken about HR product and services. Anyone heard of 'targets being in one basket' ?

2. Most attendees are already on Linkedin
According to this Infographic I found via Hubspot, over 80 of existing Social sellers use Linkedin as the Platform - Whoa, there you have it. I remember SHRM Hive had kiosks to help newbies get on to social media put up at #shrm12, so a lot of folks who are moving around your stall are already kind of primed up for the task you have for them. Imagine engaging them well enough and that resulting in a 'casual' linkedin post from one of them (there are many to try on) onto their social network with a mention / tag to your co / Product link? ... Linkedin? Impossible says I'M POSSIBLE right?

3. Attendees are most likely to be heavily Socially Networked
To connect to the difference between being on social media and being socially networked - listen to @jill_rowley define social selling in this discussion.
The social envy piece of attending an annual notwithstanding, it's not rocket science to figure out that majority of the attendees will be highly networked by occupational hazard (being in Human resources) - so be it. So engage with the right one and the chances about that pleasure being broadcasted to their' network' is very highly likely.

So get those strategy boards out and set the ball rolling and as a parting note, I feel that a Great metric to watch for measuring the success would be the length of the queue to Relaxation Stations - see pic below: 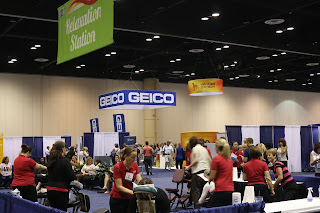