Wondering Diversity influenced our Luck on a Trekking trip to Parambikulam?

Where we a Homogenous group ? Except for the Organisation where we all had our 'day-jobs',  that's a word which could not be any farther from reality if one attempts to describe the backgrounds and interests and the #WHY's for the 14 members from our company trekking club who team up for this journey which commenced from Infopark, Kochi around 6.15 am on 19th October.  Our 'soon to become six' year old firm's employees had began teaming up for the cause of adventurous treks to natural habitats for some time now and this one happened to be the fourth (we call it season) session for the Club overall and third one for myself with this gang.  I had really enjoyed the trips to Chinnar-Marayur and Thekkady earlier and was excited about this one as well. Frankly, i thought the heterogenous nature of the 'Whys' actually make it all really worthwhile for the entire team from a Learning perspective. I also thought that this sort of added to the diversity aspect of the group and actually aided in binding the group together.

Things started to unfold a bit slow as we approached the sanctuary gates from Kerala's border at Govindaapuram. It's interesting to note that we will be traversing two states on this journey as the only   motor-able roads for public use from Kerala to Parambikulam are via Sethumadai which is in Tamilnadu State. This was a trivia question that travellers shared during my first trip from CMS college back in 1993-94.

So we took almost 2 hours to cover the last 30 odd kms as the roads were not very good and the procedures we had to comply while travelling on a hired vehicle (Traveller in our case) related to the border crossing (permits etc).

So one would ask - how was our trip? Here's a list of animals, birds, reptiles etc which we saw during these day days:


Looking back - the delays actually helped us to sight more animals as our dusky safari extended  an extra half hour into the night - a time when animal activity is higher.

Here are my picks for the major "High's" of the trip - adding a pic wherever i could capture one.
1. Sighting of a Leopard - just my second sighting ever and we had this one in our sight for over 30 seconds 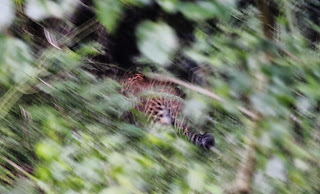 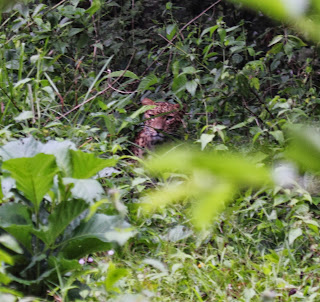 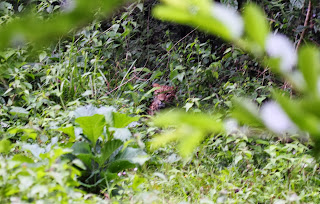 2. Malabar Trogon
3. Dusky Palm Squirrel - the smallest squirrel in our country and very rarely seen in the wild. This one is shot at 400 mm Focal length from a tall tree.
4. Flying squirrel - sighted during our dusky ride and not captured by camera
5. Sloth Bear - sighted during the dusky ride so not on camera - this one we could have used flash but I decided against it as seeing it in it's natural habitat itself was satisfying.

We decided to take a different and more picturesque route back to Kochi via Valparai.

I had not seen Nilgiri Thars outside of Eravikulam National park ever, so seeing this one in an unlikely spot as we were taking pictures of Aaliyaar Dam was a pleasant surprise. 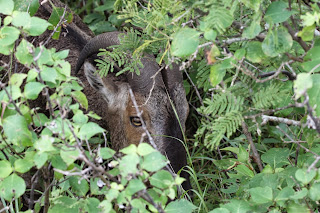 How did diversity help ? Well we had people who kind of had different interests and some of these translated into enabling behaviours like the ones I'm attempting to list below:
1. Some members would concentrate and watch so that they can be the 'first' to locate and feel proud (that's it)
2. Some would cheer the group when there was a lull in sighting
3. Some would add their 'story-line' to events that were unfolding - adding to the excitement
4. Common Goal of 'Enjoying the journey' - struck us together.

We did have a small situation where our driver was careless while parking at Valparai (delayed Lunch time) and his efforts to seek rationale from the Police officer did not end up being very pleasant - but that only had folks coming together (yes volunteering) for support and providing solutions preventing any hold up.

The last animals we saw when the entire group had only 'home and loved ones' in the minds, a bit  seen after we crossed Vazhachal -yes, we saw three elephants as they were lit up by the headlamps of the vehicle behind us :-) (Lucky again?)